skip to main | skip to sidebar

Ocea Otica update,3 new mugs in the works and...

So its been quite some time since i sculpted and molded some new designs. Of recent, many of the one off pieces i produced last year were started off using greenware from vintage molds, the Munktiki x Ocea Otica Zombie Moai, as mentioned earlier, was a sculpture from 2003 and the Kapriman mug, which i finally started releasing at the end of last year, was sculpted in 2007. So what the hell have i been doing all this time, well, who cares.
So to make up for lost time, before i have to go on a little month long hiatus in the beginning of November, I have 5 mugs in various states of completion. Here is some info on three of them.
To get the ball rolling, I was struck with the desire to sculpt a Moai with a traditional feel. The Moai, probably having the largest catalog of interpretation by ceramic vessel, is still my favorite icon from Oceanic arts, and provides endless possibilities for the mug maker and artist. Pictured below is the first greenware pull from the mold. The plan is to texture each mug to varying degrees of decay, then the color combos will range from the natural to the eye popping unnatural. This Moai stands 8 3/4 inches tall, liquid volume to be determined later. I will probably produce these until the mold wears out, or i wear out. I hope to have some available by the end of the year.

Next up, by no coincidence created at this time of year, is the first in my return to the subject of the Zombie, a favorite cocktail of mine. "Thirsty" depicts a man in serious need of a cocktail. Digging to the surface gave him time to consider how many years it been since his last savory cocktail, and being that there is a dry ice chamber in the back of the mug, a Fogcutter may be appropriate, though a Zombie is its most desired. Pictured below is the sculpture close to completion. This is a somewhat stylized "clean" zombie, in which the fats have dissolved, but the skin is still in tact, almost preserved similar to the Bog Mummies. The mold was completed and hopefully I will start pouring these at the end of this year. This mug required two separate molds to complete and each greenware will have some subtle line work added in. Production numbers will be low, and there may be a standard glazed version and one offs.

Next up is another piece in the zombie ilk; this one being inspired by the lore of the creation of the Zombie cocktail. Pictured below is the sculpture in progress. There will be a hat added later. The look I am going for is somewhat caricature-like, or cartoonish, hopefully bringing to mind the vibe of 1950's and 1960's ad art combined with a bit of flappy skin zombie nausea.

So you may be asking, none of these are the mugs i thought you were putting out next. This is true. The Asaro Mudmen will see the light of day next year, also the Maprik and Yamok bird spirits, as well as other mug projects i have discussed in the past.
The Kapriman Traditional version, only a year and a half late, will hopefully be finished as well by the end of the year.

I was recently contacted by designer and prolific mug artist Squid, AKA Dave Cohen, about participating in his group luau pig mug project, so i will have this one off custom version of his greenware finished by the end December. You can see some of his work here: www.squidart.com

And with the holidays coming up, i highly recommend the acquisition of the Ghastly Ones new ep, Gears and Ghoulfinks, out on purple vinyl, available here: http://ghastlyones.com/merch.htm and a mug for the mustache-ed, a beautiful mug with a vintage feel, emoting the charm of Don the Beachcomber, Sophistico by Miles of Munktiki, viewable and purchasable here: http://www.munktiki.com/Newest.htm

So thats enough for now, what a gas bag, i got tired of reading this about two sentences in!
Posted by junkhauler at 9:06 AM 2 comments:

Just in time for Halloween.... 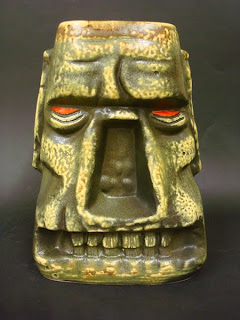 On Monday, October 26th at 6pm, at Munktiki.com, Miles' new edition of my Zombie moai will go on sale. His new edition, from my original mold from 2003, features stunning glaze work. This is an edition of only 25, so they will go quick. Here is the link to the sale info http://www.munktiki.com/Merchant2/merchant.mv?Screen=PROD&Store_Code=M∏_Code=OO&Category_Code=H. It has been a real treat collaborating with Miles and Munktiki, as it a was a Munktiki mug that was my first non vintage tiki mug.
**October 26th update, got word these sold out**
Posted by junkhauler at 6:29 PM 1 comment:

junkhauler
My work has been included in shows at such venues as Copro Nason Gallery, Gallery De La Cruz, Ink N Iron Festival, M Modern Gallery, Elroy Artspace, and various “tiki” themed events throughout California. I am a featured artist in author Jay Strongman’s book Tiki Mugs: Cult Artifacts of Polynesian Pop, and a photo, makeup, and cocktail collaborator with leading cocktail historian Jeff “Beachbum” Berry on his last two comprehensive books, Sippin Safari and Beachbum Berry REMIXED. My work is a mish-mash of various forms, heavily leaning toward functional art in most cases. My work also utilizes skills I have picked up in a 20-year career in film and television as a makeup effects artist and model/miniature painter. My creative and/or technical work can be seen in such films as Dante’s Peak, Gods and Monsters, Hellboy 2, Another Day in Paradise, Men in Black 2 and 3, Land of the Lost, numerous Marvel superhero films and television shows such as Outer Limits, Stargate , Space: Above and Beyond, and Alias, and music videos with bands such as DEVO, Primus, and Tool.

those who bothered to read this